Appointment to seat came after father, Bruce, served in same role for 20 years

Growing up exploring the outdoors of Oklahoma, Mark Mabrey thought he had a good feel for what the state had to offer in terms of wildlife and terrain. A lifetime spent hiking, hunting and fishing had taken Mabrey all across his home state, from the plains of the panhandle to the scenery of Green Country. Yet now, after a few months in his newly appointed role as an Oklahoma Wildlife Conservation Commissioner, Mabrey is discovering a fresh appreciation for this neck of the woods.

“It’s pretty amazing the different landscapes Oklahoma has,” said Mabrey, who serves as Mabrey Bank’s Market President, SVP for Okmulgee. “I felt like I had been all over Oklahoma in the past, but from the panhandle all the way down to Hochatown…the uniqueness of the landscape I’ve seen in the last two months in Oklahoma has been really impressive.”

Earlier this month, the Commission met at Beaver’s Bend State Park, in part to view the modest American alligator population inside the region’s wildlife management areas. It was Mabrey’s first time there, and it delivered just another example of the possible relationships Oklahomans can have with nature.

“There’s such a wide range of wildlife opportunities that I have really been intrigued with,” said Mabrey. “Whether that’s for birdwatchers, hunters or even butterfly viewing groups, I’m getting a good feel for how much work goes into managing those wildlife areas for the public to access.” 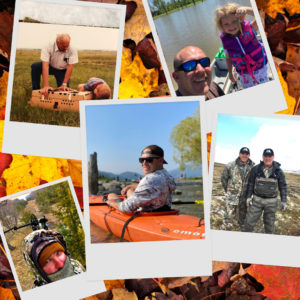 While recent trips around the state have been eye-opening, the role of Wildlife Conservation Commissioner is anything but for Mabrey, who was selected for the District 2 seat after his father, Bruce, had served in the same role for the last 20 years. The succession within the Mabrey family was no given, however, as friends had to convince Mabrey to even apply and petition for the state-appointed role.

Paperwork and interviews with the Oklahoma Secretary of State and Chief of Staff to Governor Kevin Stitt followed. Finally, a Senate recommendation from Senator Roger Thompson, appointment from the Governor’s office and confirmation from the State Senate officially established the younger Mabrey to follow in his father’s footsteps.

“[The Commission] is something that has always interested me, and I have a passion for wildlife like [my father] does,” said Mabrey. “Dad and I have a really good relationship, and I am super proud of that. He and I would discuss things [when he was on the Commission], and he would get my opinions on different ideas. I was privy to wildlife management rules and regulations since Dad was in the trenches.”

‘Trenches’ is an apt term for how the Commission serves the state to preserve and grow the wildlife areas and the species which live there, while also growing the hunting and angling community to care for that land. It’s a delicate balance for Commissioners, who serve eight-year terms, meeting monthly to help govern the Wildlife Department’s operations and financial transactions – doing it all in an unpaid capacity. Ultimately, it’s a challenge that Mabrey welcomes as a new Commissioner.

“There are so many opportunities for hunters and anglers and even birdwatchers in Oklahoma,” said Mabrey. “Elsewhere lease and land prices have taken away from the ‘Average Joe’ getting to hunt and fish. With the Wildlife Department managing its lands as well as they do here, it increases accessibility for Oklahomans to get out and see and hunt and fish. Our Wildlife Management areas are open to the public for their use.”

Mabrey has a unique perspective on it all, as one of just two current Commissioners under the age of 40. While spending time learning about the role from his dad, the younger Mabrey is looking to help outdoor exploration appeal to the next generation. Education about the conservation of wildlife can start at a young age – even in this era of comfort and digital screens.

“I think the biggest threat right now to hunting and fishing is the accessibility to young people,” said Mabrey. “It’s very important that we promote opportunities for young people to get outdoors. It’s so easy to spend your time doing other things on your iPad, TV, Social Media – so easy just to not go out and explore.”

Those comments aren’t unfounded. Some troubling trends have been developing for years amongst that next generation of hunters and fisherman. While the state of Oklahoma has been amongst the best in the U.S. in overall licenses sold, the average age of those purchasing hunting and fishing licenses across the nation is rising.

“Hunters and fisherman are the true conservationists,” said Mabrey. “They give more back to wildlife agencies. That is a big key to maintaining healthy wildlife populations. Getting parents involved with their children is of utmost importance for our wildlife agency over the next several years.”

However, because of the work of the Wildlife Conservation Commission, Mabrey is confident in a bright future for all outdoorsmen and women in the state of Oklahoma. Despite his representation over the District 2 area, Mabrey is firmly invested in seeing all habitats in Oklahoma grow and flourish under his term on the Commission.

“There are just so many opportunities here,” said Mabrey. “Oklahoma has so many game and fish species. I probably love the habitat process more than the actual hunting. From bear in eastern Oklahoma to elk in the Wichita Mountains and the panhandle areas, quail, pheasant, deer – I would put Oklahoma as being as diverse a wildlife state as any state out there.”